How the rider sits on a horse and moves their body affects not only their own balance but that of the horse.  The rider either restricts the horse or allows it to move.

It is the rider who works to bring the two systems together in a balanced and harmonious way.

The biomechanics of the horse that allow him to carry a rider well are mostly understood. there is little information available and a lot of opposing opinions of what is correct rider biomechanics . Many riding instructors ignore the gymnastic use of the rider’s body and the role and effect it has on the horse.

Which is as much a demanding process as it is to train the horse.

Whenever a rider sits on a horse their body meets with powerful forces and energy generated by the way the horse moves. The rider has to train their body to be able to meet the forces that the horses body generates. Rather like bouncing on a trampoline.

Horses don’t naturally possess the postural strength, straightness and suppleness of joints to be able to carry a rider in consistent engagement, we have to train them.

The human body is not set up to perform the skills required that bring about the changes in the horse to carry a rider in engagement.

Most people agree on how a horse should go but when it comes to what the rider should do with their own body, there are many differences of opinion.

For example it is often said that the rider should be completely relaxed, and yet equally that a great deal of effort must be put into riding well. Most schools of dressage stress the importance of lightness of the aids, and yet forceful riding is accepted at the highest level of training.

And within the rider’s position, there are considerable differences of opinion as to what is correct

It comes down to confusing the end with the means, Becoming a good rider is a process. What you achieve in the end is not the same as what it took to get there.

What requires considerable effort in the beginning can become normal.   If an advanced rider is asked how hard it is to keep their leg in position they will probably say that they aren’t doing anything with their muscles, whereas a novice rider will probably be working 10 out of 10.  It takes time and effort.

If you look at the effortless grace of a ballet dancer, you do not see the endless hours of hard work building up muscle strength, suppleness and specific muscle memory that it took for the dancer to be able to express such ease in the control of their body. It is the same with a rider.

In riding there is an often-quoted saying in dressage that the rider’s legs should hang like wet towels draped over the horses sides. Many riding trainers interpret this analogy as that the rider should completely relax the leg, letting it hang loosely in long stirrups.

Nothing could be further from the truth. True wet-towel-draping-round-the-horse’s-sides feeling is the result of years of muscular effort in order to form the human leg, by the suppling of the joints, building up of certain muscle groups and stretching out of others, so that it becomes physically capable of wrapping round the horse’s ribcage with ease. So the effortlessness is the result of the effort that it took to get there.

The rider, who attempts to achieve the ‘wet towel’ by simply relaxing the leg as much as possible, with overly-long stirrups, will end up years later with a leg that is just as stiff in the joints and incorrectly positioned as it was to begin with, because no gymnastic development took place. The wet towel feeling will not have been achieved because a leg with joints that are not supple, and muscles that are only developed for human locomotion, is not capable of hanging around a horse’s sides.

The ease of this skill needs maintaining and will require a continued level of work. Riders often find it difficult to maintain a leg which stays in the right place and be able to use it.  It takes time determination and effort, but if you keep at it you will finally be able to keep your legs still.

Relaxation or effort?—Both at the same time

It’s about maintaining body tone without seize up and being able to engage your core without tightening up other parts of your body.

A rider who attempts only to ‘go with’ the horse will end up as a passenger to the horse’s natural lack of balance for carrying a rider. Whereas the rider who only ‘comes against’ the horse with too much holding throughout their body will only bring about resistance in the horse.

Exactly the same pattern of opposing or balancing forces is present in the engaged horse: a series of muscle groups that perform postural holding (have a ‘backwards’ direction) counterbalancing with parts of the horse’s body that stretch, carrying the movement forwards. Together they form the ring of engagement which functions like a big wheel rolling round to carry the movement forwards through the horse’s body. The correct rider also has a ring of engagement in their own body, with the direction it rotates being the opposite of the horse’s ring, so that both connect together just like two cogs in a mechanism.

The two main parts that connect between horse and rider – the seat and the horse’s back, the rider’s seat must engage in the flow of movement under and forwards and round  and the horse’s back corresponds in an over and forwards stretch . This forwards stretching in both horse and rider is made possible only by the right postural support from the core muscles.

Unfortunately, instead of initiating it, most riders are inhibiting this essential forwards stretch in the horse’s back with a wrongly positioned pelvis and a lack of core. Without this connection there can be no postural control of the horse by the rider other than PULLING ON THE REINS.

Pulling on the rein steals energy from the horse and causes lack of engagement. 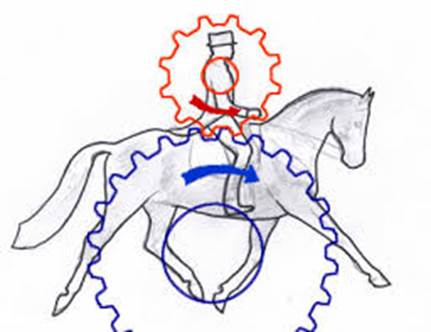 About the Author: Linda Brown